INTRODUCTION
Suspended cell cultures are the basis for the production of important medical products such as insulin, vaccines and drugs in the oncology field.
The devices currently used for this purpose are not always efficient, as they do not allow an adequate supply of oxygen and nutrients, and they are also based on systems that can damage cells by altering their normal growth¹.

In this study an innovative bioreactor for the culture of mammalian cells in suspended conditions has been tested². The study was aimed at assessing the performance of the bioreactor to evaluate its suitability for the production of cell-derived drugs like vaccines and monoclonal antibodies, and for cell expansion in immunotherapy. The bioreactor ensures physiological shear stress on the cultured cells, keeping them in suspension through a purely fluid-dynamic effect, thus avoiding impellers and rotating parts. 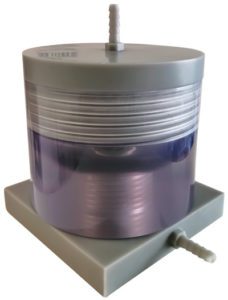 EXPERIMENTAL METHODS
A series of experimental tests were performed using two in vitro cell models, JURKAT, an immortalized T lymphocyte cell line originally obtained from the peripheral blood of a patient with T-cell leukemia and U937, a monocytic cell line that can be differentiate into various types of macrophages or into dendritic cells. Both cell lines, grow very rapidly in suspension, making them particularly suitable for viability and cell growth study. Cell growth and viability were obtained by measuring, at various times and under different conditions, the total number of nucleated and viable cells by Trypan Blue dye (0.4%) exclusion assay, using a Bürker hemocytometer chamber. The significance of the difference between bioreactor and static condition was evaluated using the Student’s t test, with p < 0.05 as the minimum level of significance.

RESULTS AND DISCUSSION
Preliminary results of the study show the ability of bioreactor to support cell growth, which is similar to those of control cells grown in a low volume of medium and in static conditions (30/50ml). More important, when the cells are grown in a large volume of medium (≥ 100 ml), the cell growth resulted significantly increased in the bioreactor compared to static conditions. We hypothesized that this positive effect, highlighted in the bioreactor, is due to the greater exchange of oxygen and nutrients guaranteed by the perfusion. Contrary, in static conditions, the cells settle on the bottom of the flask and the excessive amount of medium in the absence of perfusion does not guarantee a sufficient supply of oxygen and nutrients. 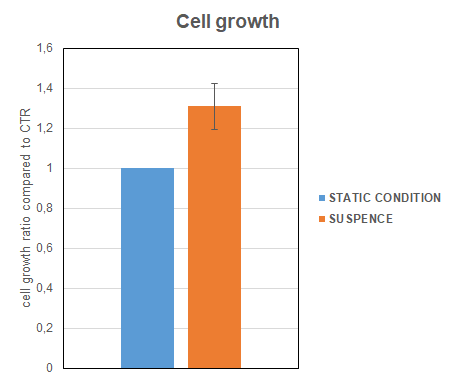 CONCLUSION
In conclusion, these results provide initial and promising indications on the ability of our bioreactor to better support the cell growth of mammalian cells under suspended conditions, opening the possibility of its use in biopharmaceutical applications.